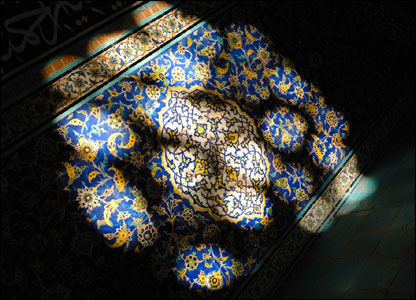 Light is an important element in all architecture. Le Corbusier said, “Architecture is the learned game, correct and magnificent, of forms assembled in the light.” Louis Kahn said, “I sense Light as the giver of all presences, and material as spent light. What Light makes casts a shadow and the shadow belongs to Light.” Without light, we cannot see form, color, or texture. Light—natural light—is what gives character to architecture.

In Islam, light symbolizes God. The Qur’an states, “God is the light of the heavens and the earth.” Light in Islamic architecture, then, is used to symbolically represent God’s presence in a space while emphasizing the color and texture of decorative elements, materials, and architectural articulation.

One particularly intriguing mediator of light and space in Islamic architecture is the screen. The screen in traditional Islamic architecture is used to filter harsh sunlight, and it was developed out of necessity in the hot, harsh-sun climates of the Middle East and Asia. Thought sometimes they are made of wood, many times these intricately patterned screens are carved out of stone. Some of the most beautiful examples of the type of Islamic stone screen can be found at Fetehpur Sikri in Agra, India.

In architecture, screens tend to blur the distinction between interior and exterior space. In Islamic architecture, they are used to mediate the direct sunlight by casting intricate shadow patterns in the interior space. These patterns, which I will talk about in my next post, are very important in the art and architecture of Islam.

The use of screens in Islamic architecture is not confined to the past. Architects have continued to reinterpret the concept of “screen” in new and innovative ways through the 20th century and even today. For example, Jean Nouvel’s Arab World Institute (1987) in Paris uses an operable screen of camera-type apertures to control sunlight. Other interesting recent examples of Islamic screens can be seen on the National Mosque (1965) in Kuala Lumpur, Malaysia, and the Museum of Islamic Art (2008) in Doha, Qatar.
Posted by The Beholder at 5:50 PM

Thanks for the post. I am a mum of one beautiful 8yr old and in the 3rd year of a teaching degree majoring in Art and History and presently teaching a unit on Mosaics to a class of mostly Arabic students (14/15yr olds) here in Melbourne, Australia.I'm not sure if those are your photos, but they are fabulous and i will probably show them to the students. Thank you, Cat

Great post and quotes. I especially enjoyed the one from Kahn.

More attention should be paid to the shadow.

Through the Oculus is a casual forum for my thoughts and observations--generally about architecture, design, art, and music--but mostly about life.

The Beholder
James lives in New Haven with his wife, five children, and a miniature dachshund named Oscar. He is a graduate of the Georgia Institute of Technology and Yale School of Architecture. A registered architect, he is Senior Planner in the University Planning department of Yale University.

Visitors to the Oculus